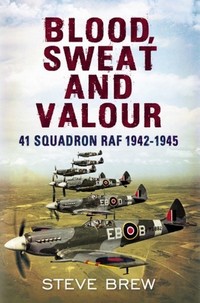 « Formed in 1916, 41 Squadron is one of the oldest Royal Air Force squadrons in existence. The unit saw service in the First World War, on Policing Duties in the Aden Protectorate during the 1930s, throughout the Second World War, and more recently in the First Gulf War and Yugoslavia. Until now, however, its History has not been written. Blood, Sweat and Valour, by Steve Brew, is the first comprehensive study of this illustrious squadron, concentrating on its wartime activity between August 1942 and May 1945. The work examines the unit’s role within battles, operations, offensives and larger strategies, and details experiences made by the pilots and ground crew participating in them. The Squadron’s actions are often revealed for the first time, through records that have previously not been available. The author has drawn heavily on unpublished primary sources, including a large number of logbooks, interviews and personal accounts. 41 Squadron’s own archive was made exclusively available to him for the purpose of writing this work. Blood, Sweat and Valour evokes the feeling of the period, portraying not only a factual account but also one that captures the color of life on a Second World War fighter squadron, with a balance between material of a documentary nature and narrative action, intertwining fact with personal recollections of events, serious events with humor, and sobering statistics with poignant afterthought. Blood, Sweat and Valour is borne of deep and emotive sentiment, expressed by the pilots and their families, which is also embedded in the culture of today’s 41 Squadron, to remember every man and to give him his rightful place in history. » (Source: Amazon)