I’ve been doing more (slow) work on the B-24 template. The top turret has been converted to the “High Hat” A3D turret, and the waist guns have been added. I’ve also made corrections here and there. For the most part, all that is left to do is detail the wings, as well as some other details. After that, I’ll call it a “finished template”. Given the number of possible variations, I’ll be doing the actual details on a case-by-case basis and not even attempt to make a “one-size-fits-all” template.

I’d like to seize the opportunity to recommend the book “Consolidated Mess – The Illustrated Guide to Nose-Turreted B-24 production variants in USAAF combat service” by Alan Griffith. It’s a very-well illustrated 193-page book which is invaluable for anyone who wants actual detail on the Liberator. Despite being 193 pages, it is not exhaustive. This is by no means the author’s fault – the subject is simply so complex that it would probably be nearly impossible to cover all variations in a single volume. Note that this book covers only the B-24G to the B-24M (the nose-turreted versions) and does not cover photo recon variants of the Liberator or any foreign variants. For example, the RAF used the Liberator extensively, and modified it extensively as well, but these are not addressed in the book. 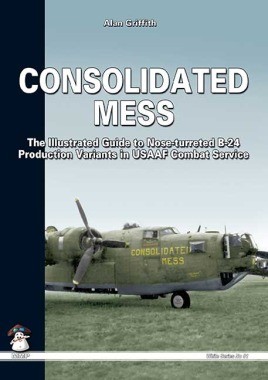 The book is out of print and used copies are generally very expensive, but it can be purchased in ebook format from Casemate in the US or UK for the very reasonable price of $19 or £13.50. I will complain a bit about the protected PDF which can only be read using Adobe Digital Editions, a sort of watered-down and very unpractical edition of Acrobat Reader, although I understand that it is important to use DRM to protect one’s work.

Hopefully, I’ll be able to show a first Liberator profile in a few days !